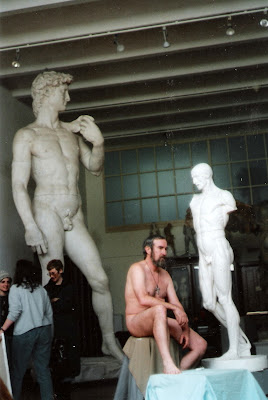 This blog is starting out with the contents of a previous blog at Delphi Forums.  Google provides a better set of editing tools for combining photos and text, and with regard to text, is much more "poetry friendly," allowing the poet to choose line lengths rather than having them all glopped together in a continuous paragraph.

Within you will find photos of artworks I have posed for in over twenty years posing for art classes and individual artists, along with my comments about the classes, teachers and artists, and some photos of myself posing, almost always nude.  There is no sexual intention in all of this, simply the desire to share my experiences with artists, other art models, and potential art models.  I have found that sharing my experiences with others has resulted in the recruitment of at least two new art models.

I also share two aspects of my own attempts at art, in poetry and in self-portrait photography.  If seeing photos of a naked, aging, somewhat out of shape male is not your cup of tea, you have been warned!  Minors, even art students, should not view the content within unless they have parental permission to do so.  The photo above is one of my favorites, when I posed for a painting class in the spring of 1996 in front of the full-size plaster cast of Michaelangelo's David, at the end of the cast hall at the Pennsylvania Academy of the Fine Arts, the nation's oldest art school.

Comments are welcome, so please let me know what you think.  I have a thick hide: I can take it!
Posted by Warmenuf at 5:44 AM 2 comments:

MESSY ART
Art, like life:
messy along the way,
beautiful
in its ordered end.


MY BODY
Intending no
sacrilege, I offer
my body
for your art.

GESTATION
Curled in the womb
of your gaze,
I await birth
through your
dancing fingers.

I don't recall the occasions for the composition of the first two Haiku here, but the second two are vivid in my memory.  "Gestation" came to birth after a session at Doylestown Art Center, run by a talented art teacher.  I had posed for Sunday open sessions there several times, when the owner/teacher asked me to pose one day for a class of neophyte artists, all female, none of whom had drawn from a nude male before.  One pose suggested was literally in a gestation position, which yielded some interesting drawings.  A little reflection later gave me the poem.

"Rainsnakes" was composed after a night session (or maybe it was just a very dark and stormy afternoon) at Tyler School of Art, the art school affiliated with Temple University.  The studios all had slanted glass roofs, allowing a lot of natural light in during the day.  When it rained, the runoff made interesting patterns down the panes of glass.
Posted by Warmenuf at 3:44 PM No comments:

A Nun Walks into the Room 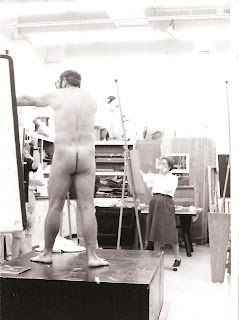 Posing naked--
how can that be?
Strange bedfellowed
odd-coupled words--
posing naked. 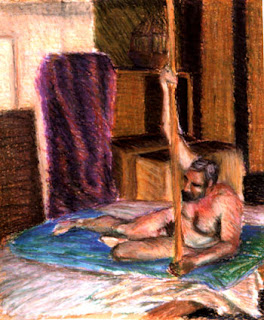 Posing is artifice,
naked is nature.
Posing acts a part,
hiding the real as it acts;
what is there of revelation
in posing?

And yet
I pose naked.
I strip my body
to reveal more than body,
I "pose"--is there another word?
I act, holding an imaginary bow,
rowing a non-existent gondola,
bearing a slender stick
as if it were a cross.

They look at me intently, 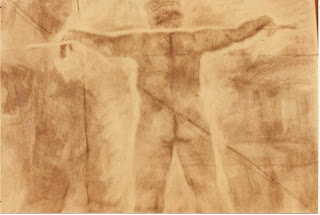 walk closer from time to time,
frowning when the contour of an arm
will not work on the paper.
Sometimes they touch
skin muscle bone.
How can they fit together?

Contradicting the contradiction
I pose naked. 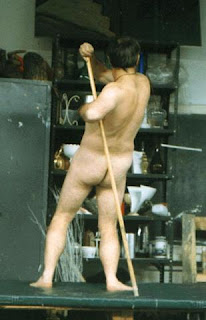 And the posing becomes real
by honest artifice.
Charcoal and paint
paper and pastel
and
there I am, refracted by air
reflected through eye and brain
onto a surface no longer just surface,
no longer flat, no longer dead.

I have posed naked,
and while I, naked,
may not be beautiful,
yet through my posing
the naked truth
in all its beauty
is revealed.


This is one of the earliest poems I composed after I started modeling in the fall of 1990.  The illustrations span a number of years.  The first and third are from Jim Rosen's class in the Spring of 1991 at Augusta College.  The last is from Philadelphia, a favorite pose I think of as Charon, the ferryman on the River Styx, roughly drawn from his depiction in Michaelangelo's Last Judgment.  The second is a painting from UNC-Greensboro, another favorite pose that is reclining, but with action of the arms and hands not usually seen in a reclining pose.  If there is an inspiration for this one, it might be the famous photo of the Marines raising the flag on Iwo Jima.
Posted by Warmenuf at 3:45 AM No comments:

It's not just whence
but also how
you look from where
(and how)
you are.

You are and
the object (which
is your subject)
subjected to your
objective view
is, too.

The intersection
of gaze and study
with the isness
is creation's flashpoint.

The fiery letters
danced, they say,
before setting
themselves in stone;
your gaze,
far,
near,
between,
must dance the empty
spaces,
fill
them with living form
and color.

Your perspective or mine?
Or do all
merge in oneness
if we could but
sit a spirit-space
apart and see
all, not many
separatenesses?
Posted by Warmenuf at 3:37 AM No comments:

Another excerpt from "The Tao of Figure Drawing" by Tom Byrd:


In the next class, Prof Rosen has the students do a different warm-up exercise, which he calls "visual tracking." The resultant drawing he calls a "space cage." "We are drawing not the figure as it is, but the figure as it is perceived." This could also be described as "drawing the process of perception," and at first it is a difficult concept for some students to follow through on.


As the students gather around, he has me pose and illustrates what he wants. As he views me through his aperture, he calls out where his eye is tracking as he draws a matching line. "My eye rests on his beard, moves to his left elbow, across to his penis, down to the right big toe, back to the right heel, up to the left knee, and so forth." 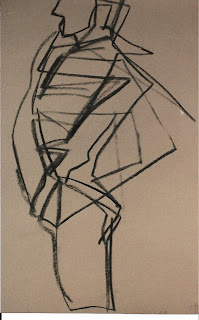 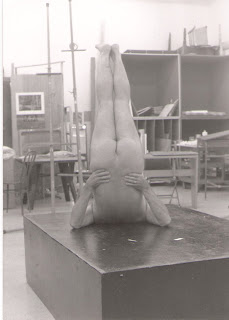 After the students do this exercise, he has them turn their easels around for criticism. Some have ended up with an outline of at least part of my figure. One clearly shows the shape of my head and nose. This is not what Rosen wants. "The eye doesn't work that way," he says. "It makes straight lines, not curved ones. If you are sensitive to how your eye sees a curve, you will find that it tracks back and forth along it, checking one side, then the other in a zig-zag, a series of straight lines. There is no way, if you are honest in doing this exercise, that you will end up outlining the head, or any other part of the body."


After the final attempt at this exercise, Rosen allows the students to begin filling in the figure, working over the palimpsest of the visual tracking exercise. The illustrations in this post show first poor visual tracking, showing the outline of the figure. The other two show a pose and a very successful exercise with that pose. 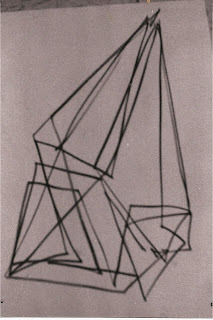 Posted by Warmenuf at 3:46 AM No comments:

St Jerome: Story of a Painting 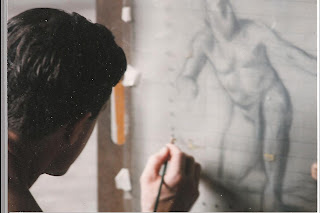 One of the more interesting people I met while living in Philadelphia was Tom Kohlman. A graduate of the Pennsylvania Academy of the Fine Arts, he was working as a security guard at the Academy auxiliary classroom building at 1301 Cherry Street, just a block from the main building at Broad and Cherry. Tom was very serious about his painting, and was also a devout Catholic. He was close with Al Gury, a painting teacher at the Academy (and at several other schools in town), who was also a devout Catholic, and who often painted religious themes. (For more on Al, see my first blog entry, "Synchronicity.") 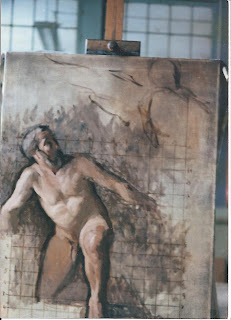 Tom asked if I would pose privately for him one day, and I agreed. The first project he wanted to try was the beheading of John the Baptist, and I posed for that a session or two at his apartment. I don't think he finished that one. Later he contacted me about another project, a painting of St Jerome's vision of an angel. For the angel, he chose a young African American boy in his parish; we posed separately, never together, and I never met the other model. 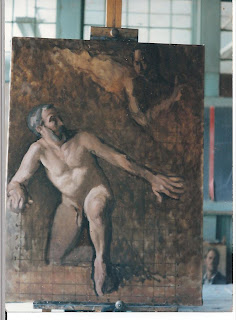 Tom got permission to set up a studio in St Patrick's Catholic School, not far from Rittenhouse Square, at the time closed and undergoing renovation. This took place in the summer of 1995, during an incredible heat wave. I will never forget one August evening when the temperature out on the street was over 110 degrees at 7 in the evening, when we finished work for the day. 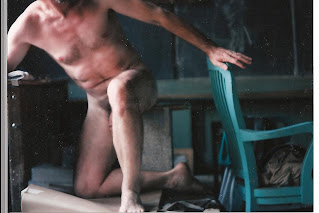 The pose was not an easy one for me. As you can see from the "pose" photo, I was kneeling, with one arm on a desk and the other on the back of a chair. For support, I had a concrete block topped with a bit of foam padding for my right buttock.


Tom spent a total of 40 hours, as I recall it, working on the painting with me posing. In lieu of cash, I posed a good many of those sessions in exchange for another painting of his, an impressionistic depiction of Jesus washing the disciples' feet. 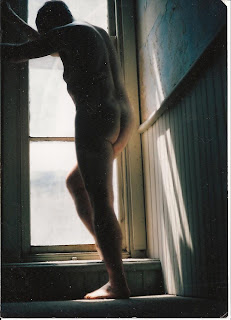 I am not aware of whether Tom ever finished the painting. It was getting close in the photo "painting 2," as you can see, but he was unsatisfied with many aspects of it. During a couple of the posing sessions in the closed school, I took my camera and posed myself (with a timer on the camera) on another floor of the building. The photos from those sessions belong in a larger collection I think of as "Mirrors, Windows and Doors."  The three here are titled, from top to bottom, "Into the Light," "Invitation" and "Window Seat." 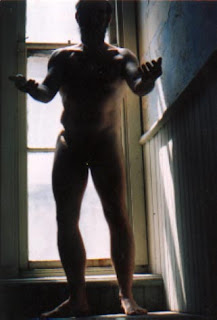 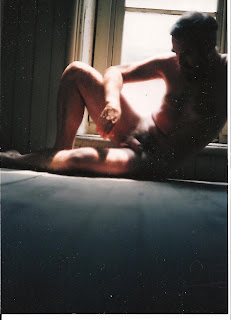 Posted by Warmenuf at 3:38 AM No comments: